I had originally planned for a final post on items I’d made in 2012 but my husband was playing around with the camera and accidentally deleted the pictures so I will have to save that for a later date (I know, it’s nearly 5 months into 2013 and I’m still talking about 2012 clothes).

I’ve been in a sewing rut lately, It’s not so unproductive as I’ve been quilting and needlepointing while I figure out my next few garment makes. I had originally planned to start the Colette Violet blouse (I traced my pattern out and prepped my muslin fabric) but I’m wary of all the alterations I need to do on it as I don’t like the boxy fit and it runs a little large and short I hear. In the meantime I’ve been researching and writing down all the possible alterations I may need to do for it.

A few months ago I picked up this book at the local library sale for 50 cents. Fabulous Fit by Judith Rasband is all about the Seam Method of Pattern Alteration. The premise of the book is that the slash and spread and pivot methods cause distortions in the pattern that create many more problems, so Judith shows us (with many interesting illustrations) how to make precise changes to the seamline of the pattern. If you want more information, check out this article from the Threads magazine website.  The book is a little dated in it’s advice on body shapes and types and I don’t  necessarily agree with the generalizations about body type, but it does have great advice for common fitting problems and I like the illustrations.

I can’t say if this fitting method is better or worse than other methods because I don’t often have to do pattern alterations other than a sway back adjustment or transitioning between different sizes, but I do have broad shoulders and as this garment has sleeves and is not a knit pattern I may have to make some adjustments.

Here is the adjustment advised by the book. My only concern is that is appears to have shortened the armscye in the front (I don’t know if you can see it but the zigzag lines indicate pattern overlap, whereas white spaces indicate spreading), which may create another set of problems as I set in my sleeves. I could try the method Sunni demonstrates and see where that takes me.

To fix the boxy fit of the top I will likely add  double pointed darts, this is my mother’s favorite way of fitting a garment.

What do you guys advise?  Do you have a preferred alteration method and why?

Alas I’ve succumbed to the madness that is Jungle January. After seeing animal print upon animal print over at Pretty Grievances, I knew that I too had to kick off 2013 with animal print. I had less than a yard of inexpensive poly knit fabric, just enough for the Maria Denmark Kirsten Kimono Tee (another free and awesome pattern). This was going to be a wearable muslin because…

…have any of you seen a print as hilariously ridiculous as this? There are leopard (cheetah?) spots, flaming paisleys and if that’s not enough for you, a light dusting of crocheted doilies. I must admit though, after wearing this “wearable muslin”, I actually liked it. I tried it on and was like “hey, it’s not so bad”. This is what Jungle January does to people.

Here is the next installment of my 2012 project: It’s the infamous Colette Sorbetto top. So many reasons to love this pattern – It’s free, it’s quick, it’s easy and it uses minimal fabric.

The fabric was a scrap (poly) piece my mother had left over from many years ago, I wouldn’t be surprised if this fabric is older than I am. I think I used less fabric than the recommended amount, that’s how great this pattern is.

All the inside seams were sewn as french seams, and I made the bias binding out of some leftover purple poly scraps – a real pain because the bias strips were slipping all over the place.

This top’s gotten a decent amount of wear – it’s great with cardigans and it’s a perfect beginners project. I’m planning on making a few more for 2013. 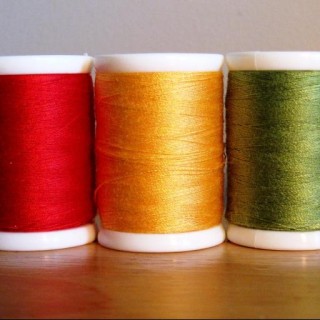 I love sewing, embroidery, pretty much anything related to fabric and textiles.